The tradition of boat trips dates back to the pre-war times. We offer boat trips from April to November. Many tourists both from Poland and other countries use our services. Boat trips on the Krutynia River is a regular attraction in the programme of foreign tourists. Many guidebooks (also by Pascal) classify this attractions as a must! The trail goes through the Krutyn Reserve.

The reserve was created in 1983 owing to the effort of Rudolf Klarowski, the former wildlife manager in Olsztyn. The reserve with the area of 273.12 ha protects Krutyn Lake and the upper part of the Krutynia River and the surrounding deciduous and mixed forests.

Description of the route

We start at the harbour next to the bridge and and go up the stream towards the tourist centre „Syrenka” and the PTTK campsite in Krutynia. After about 200 metres, we pass a historic building of a pre-war sanatorium on the right. Today it is a canteen of the „Syrenka” centre. Next we row into a shallow and about three-metre narrow canal and go around the biggest island on our route. On both banks we can see the activity of beavers – birch trees that were nibbled at, hazelbushes that were cut down. After we pass the last buildings, we go into the forest which grows on the slopes of morainal hills among which flows the Krutynia River. The river reveals the curiosities of the wildlife.

The floor of the Krutynia River is covered with stones in this place. Most of them are covered with thalluses of Hildebrandtia rivularis, one of the red algae living in clean waters. The thallus is formed bye lower plants which have no stalks, roots or tissues characteristic for higher plants. Also freshwater sponge – an invertebrate also occurs here .
Then we move up the river. On the way we observe Eurasian jays often seen here and sometimes you may notice a squirrel peeping from behind a trunk. And sometimes… removing the epidermis of a larva… you can see a dragonfly or a stonefly.

In the underbrush, on the high banks of the river, you can see an evergreen scouringrush horsetail. In spring hepaticas, anemones and greater stitchworts appear one by one.
We now come to the shallow part of the river which has a sandy floor here showing us its fine yellow sand. The name of this place comes from the sand and is called by the local people „yellow sand”. The shallow water and the sandy floor makes it a favourtie place of children who love bathing here. You can find islands created by clusters of trees which stand in the way of the river. This obstacle slowly changes the course of the river whose main current shifts to the narrower part and sometimes erodes a „depth” in the fine sand.

This place marks the end of a one-hour trip. After we get to the stop „yellow sand”, we turn back and go with the stream to Krutyn. You can lengthen the route and go to the Krutyn Lake. Then the trip lasts about 1.5 hours.

We move up the river. After a few dozen metres the river turns right. We are in its bend. The name of Krutynia comes from its numerous meanders, typical of its lower course. The name means „a swift and winding river” and not „short” as some wrongly etymologise.
We get to another pool where in the reed you can see swans and farther, among the trees growing in the water, you can notice goosanders. In this place you can often meet kingfishers and herons. In the upper course of the river live several pairs of sawbills. Among the plants, yellow water lilies, pondweeds and water milfoils whose stalks and leaves form underwater „ropes” arrest your attention.
Going up the river, we can see trees growing on the banks of the Krutynia River. Among them there are splendid pines with spire-shaped tree trunks with the traces of brak-cutting for resin from the 1960s, oaks and hornbeams among which grow May lilies and common cow-wheats.
Over the water, the most frequent tree is black alder.
You can see here the shells of a river swan mussel which is the most frequent food for the American mink and the otter. Water striders quickly move on the surface of the water.
The river is blocked by the remains of a wooden bridge in the place where the Teutonic knights forded the river to get to the nearby watchtower on the Krutynia River. From the bridge to Krutyn Lake there is a stone-paved road dtaing from the interwar period when there was a restaurant „Murawa” on the lake and a harbour of boat carriers.
When you reach Krutyn Lake, you can admire splendid ash trees. The reed island on the lake hides a swans’ nest where they have been living for many years.

Here we turn back and go with thr stream to Krutyn.

All the members of the Associations have legal licences of Inland Navigation Carriers – which guarantees the highest quality of our services and the safety of our passengers.

On special request we organise:

We allow guided tours and travel agencies to negotiate prices. 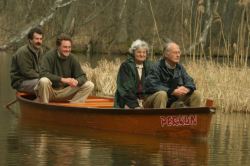 Poland canoeing trips
Kanu Masuren
Spływy kajakowe rzeką Krutynią
Przewiń do góry
Our website uses cookies to provide services at the highest possible level. Some cookies are necessary for the website to work properly. We also use other types of cookies, e.g. to collect statistics. They help us in the development of the service, but they are voluntary and can be disabled. We invite you to read our Privacy Policy.AcceptMore information